Rally was pleased when it was announced that the newly elected chair of the Children’s Oncology Group (COG) was going to be Dr. Doug Hawkins, a Rally-funded Researcher who has served for the past nine years on the Rally Medical Advisory Board and received funding for early phase trials and biologic specimen collection at Seattle Children’s Hospital (SCH). Dr. Hawkins is also the Division Chief of Hematology-Oncology and the Associate Director of the Center for Clinical and Translational Research at SCH. He transitioned into his role as chair this month, taking the reins from fellow Rally-funded Researcher, Medical Advisory Board member and current COG chair, Dr. Peter Adamson. 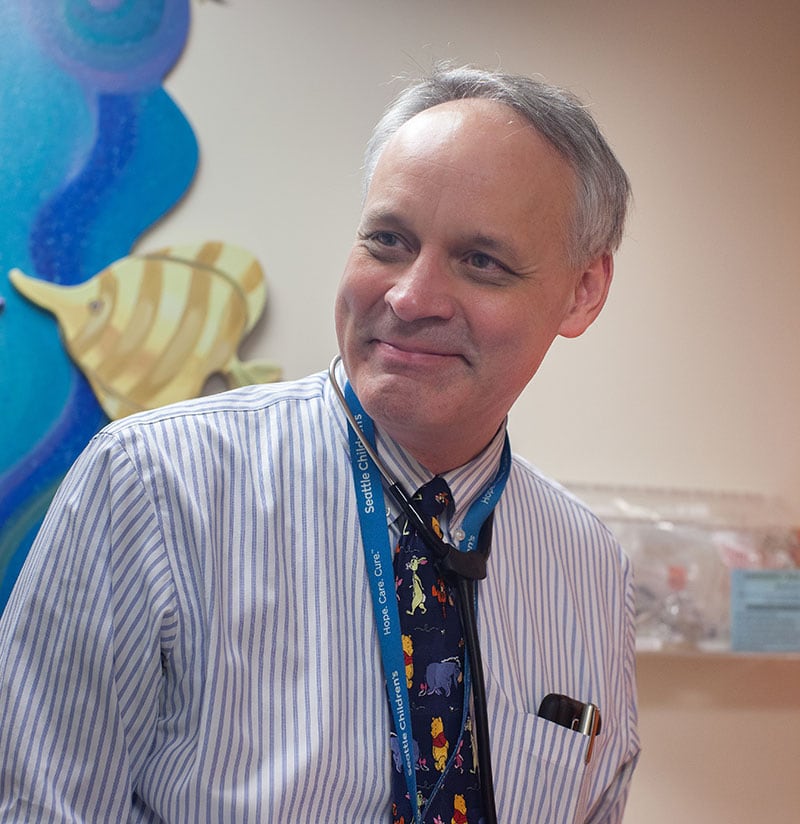 At Rally, we work endlessly to uphold our mission of funding childhood cancer research in hopes of finding better treatments with fewer long-term side effects and ultimately, a cure. We believe that every child deserves a chance, which is why the work conducted by the COG is so near and dear to our hearts. As a Rally grant recipient for Project:EveryChild and the creation of the Childhood Cancer Research Network Database Registry, the COG is dedicated to improving the outcomes for all children with cancer and overseeing most pediatric and adolescent clinical trials.

Taking the helm of the COG is no easy task. The organization boasts over 200 member institutions located across five countries and consists of more than 5,000 physicians, scientists and medical personnel collaboratively working together to defeat childhood cancer. We are excited for the future of the COG and Dr. Hawkins’ vision. Here’s what he had to say about his plans for the COG and his newly appointed role.

The North Star is one of the brightest stars in the night sky and is often used as a guiding light for lost travelers. Dr. Hawkins, as it turns out, has a North Star of his own.

“My guiding ‘North Star’ is the mission of COG: to improve the outcomes for children, adolescents, and young adults with cancer,” Dr. Hawkins said, regarding his plans to uphold and honor the COG’s values. Additionally, he plans to focus on conducting Phase I, II, and III studies across their enormous network of small, medium, and large institutions in the United States, Canada, Australia, New Zealand and beyond. Dr. Hawkins believes that only the COG has the global reach to ask and answer the big therapeutic questions that will change the standard of care for pediatric cancer.

Furthermore, Dr. Hawkins believes that COG is uniquely poised to collect, store and distribute tumor and germ line tissue to researchers—information that is essential for gaining biologic insights that will lead to future clinical trials. In addition to chemotherapy clinical trials, COG is in a position to ask questions about quality of life, long-term toxicity and non-chemotherapy therapies (including surgery and radiation). COG has the capacity to conduct all types of research because they bring a large team with a unified mission to the table, allowing progress despite the rarity of pediatric cancer.

“I am honored to lead a group with such a lofty unified vision,” Dr. Hawkins said.

A vast network and research capabilities combined with funding from organizations like Rally have allowed the COG to make a significant impact in the field of pediatric cancer treatment. Research has led to advancements and discoveries, such as certain cancer treatment drugs. One particular drug, which treats solid tumors, was approved by the FDA in November 2018 and is an inspiring example of drug development of a highly targeted agent with early engagement of pediatric oncology that led to transformative results.

Similarly, the activity of CD19 CAR-T cells for B lineage acute lymphoblastic leukemia (ALL) are a proof of concept of cellular immunotherapy as a novel approach to cancer therapy. CAR-T therapy has revolutionized treatment because it uses specially altered T cells from a patient’s immune system to fight cancer. Rally is proud to have funded this specific CAR-T research.

These incredible developments demonstrate how far pediatric oncology has come in the last 50 years. For Dr. Hawkins, the landscape has changed vastly since he began pediatric training back in 1990.

“Our ability to understand the molecular basis of cancer through comprehensive genomic sequencing is simply astounding,” he said. “Clinical trials are moving away from evaluating standard chemotherapy combinations toward highly targeted agents or immunotherapy. Translational and clinical research increasingly involves international collaboration. Overall, survival has increased over the past 30 years.”

Rally’s Contributions to COG and the Field of Pediatric Oncology

Many of the research and discoveries made in pediatric oncology would not have been possible without funding from organizations like the Rally Foundation for Childhood Cancer Research. When it comes to funding, oftentimes our impact may not be immediately clear since Rally supports early career investigators and provides pilot data that leads to definitive and transformative studies down the line. It’s humbling to see that our funding, often after five or more years, pays off in the long run.

“I think you can look at any project funded by Rally and see its impact on future research,” said Dr. Hawkins. One particular project stood out, however, for the new COG chair.

“From personal experience, the Rally funding of the INSTRuCT (limited to soft tissue sarcomas) was critical to moving the project into high gear, leading to substantial funding from St. Baldrick’s Foundation and likely federal funding in 2020,” he said. “Creating the Pediatric Cancer Data Commons would not have occurred without the support of Rally and other foundations.”

Rally was the first funder of this important work, and our willingness to think outside the box and fund new novel ideas with solid science behind them has and will continue to help move the needle forward in finding better treatments with fewer long term side-effects and ultimately cures for kids battling cancer.

While there have been many advancements pediatric oncology, there is still a long way to go. Under Dr. Hawkins’ leadership, we look forward to working alongside him as he is guided by his North Star, and we are excited to be a part of the next great discoveries in pediatric cancer.  The future is bright with Dr. Hawkins at the helm.