A Look at Project:EveryChild with Rally Researcher Dr. Peter Adamson 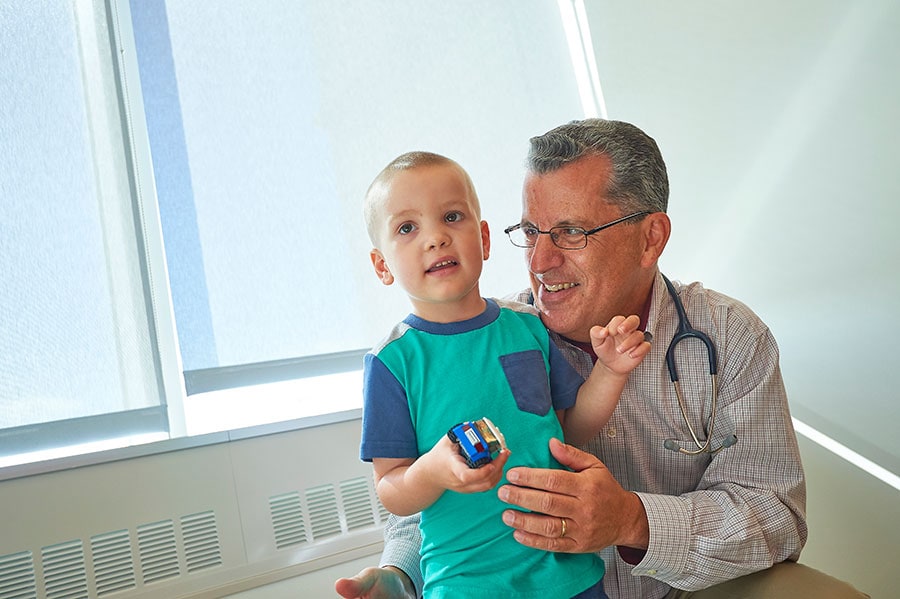 Childhood cancer is the most common cause of death from disease for children in the United States and Project:EveryChild is working to change that.

Developed in partnership with the Children’s Oncology Group (COG) and funded, in part, by Rally Foundation, Project:EveryChild is focused on finding better cures for every type of childhood cancer—regardless of how rare that cancer is. The COG itself includes over 200 leading children’s hospitals, universities and cancer centers that bring together more than 9,000 international experts in childhood cancer.

Project:EveryChild is currently making major strides in cancer research, facilitating a number of precision medicine trials that are being conducted by the COG. One of these trials includes an approach for children with low-grade gliomas, a type of tumor that starts in the glial cells of the brain or the spine and can cause vision loss. A study is also underway for children with high-risk neuroblastoma, a type of cancer that forms in certain nerve tissues and most commonly forms in the adrenal glands.

To gain more insight on these exciting new developments, we spoke with Rally Researcher Peter C. Adamson, MD. As chairman of the COG, Dr. Adamson is in constant contact with leading pediatric cancer researchers around the world who are hard at work on the most promising new therapies.

He pointed out that Rally Foundation “is one of Project:EveryChild’s founding partners and has provided vital philanthropic support during the early stages of the protocol’s development, as well as the roll-out and continued implementation at the more than 200 COG member institutions located across the globe.”

Here’s what else Dr. Adamson had to say about Project:EveryChild, its research projects, and the support from Rally that makes it all possible.

What is Project:EveryChild and what do you hope to accomplish with it?

“Project:EveryChild is the COG’s ambitious initiative to find better cures for every type of childhood cancer,” said Adamson. “The program was developed as a means to create a single platform of discovery that would serve as the basis of the COG’s translational research efforts, and as a gateway to all COG therapeutic trials.” Translational research involves the application of knowledge gained from scientific research and clinical trials to treatments and therapies that address critical medical needs.

The Project:EveryChild protocol (COG protocol ID APEC14B1: A Registry, Eligibility Screening, Biology and Outcome Study) was launched in October 2015 and has since enrolled almost 14,000 children across more than 200 COG-member institutions around the world. The mission is to link data from the laboratory to information on each child’s cancer, while collecting and providing well-annotated biospecimens to research laboratories around the world.

Dr. Adamson told us, “A primary focus of the program is to allow for universal eligibility screening, including molecular diagnostics, for patients considering participating in COG clinical research.” He added that this single study approach facilitates participation in clinical research that will increasingly include precision medicine approaches for children with cancer.

“The other major component of the protocol,” he stressed, “is to implement a universal, high-quality collection of annotated biospecimens from children with cancer, independent of whether or not there are specific clinical trial options available at the time of diagnosis.” One of the major challenges researchers face is the limited availability of these annotated biospecimens, which are biological materials — for example, tissue, blood, plasma and DNA — that are stored and made available for research. By implementing a universal collection, Project:EveryChild would provide researchers around the world with access to these essential materials, ultimately leading to more studies, trials and, eventually, treatments.

Tell us about your work at the Children’s Oncology Group and how it relates to Project:EveryChild

“As Chair of the COG, I oversee the scientific agenda for the enterprise. I am fortunate to work directly with internationally-recognized leaders in the wide spectrum of cancers that can occur in children.” Adamson said. “As the pace of scientific discovery continues to accelerate, we work collaboratively to identify the most promising new approaches and new agents that may improve the outcome for children with cancer.”

“As our understanding of the molecular basis of childhood cancer advances,” he continued, “we realize that the already rare cancers that occur in children will be further subdivided into smaller, molecularly distinct subtypes. This will necessitate the ability to apply genomic studies to help diagnose and study every child with cancer, regardless of the diagnosis. This, in part, inspired the concept of Project:EveryChild — it’s our commitment to find better treatments for all children with cancer, no matter how common or rare that cancer may be.”

Are there any current research projects that are promising?

“A number of clinical trials are starting for children with brain tumors,” the doctor said, quickly adding that this included a study for a group of children with medulloblastoma, a cancerous tumor now known to be caused by a number of different molecular drivers, or changes in the composition of the cell’s DNA.

Adamson said there are also now precision medicine approaches for children with low-grade gliomas, a type of tumor that can form in the brain or spine which can cause vision loss in children. “A study is also underway,” he continued, “for children with high-risk neuroblastoma. When the patient’s cancer is driven by changes in a gene called ALK, the cancer can be treated with therapy that includes the targeted agent crizotinib, an inhibitor that works only in cancer cells that have an overactive version of ALK.”

The doctor added that a number of approaches are also being studied in childhood leukemias, both for children with acute lymphocytic leukemia (ALL) and acute myeloid leukemia (AML).

How has funding from the Rally Foundation benefited Project:Everychild?

“Government funding for our research is limited,” said Dr. Adamson, “thus we rely on a collaborative group of philanthropic organizations, such as Rally, to act as the pillars of Project:EveryChild’s infrastructure.” He credited Rally Foundation with having a direct impact on thousands of children enrolled in the protocol, enabling them to: maintain a global registry of childhood cancer patients; deploy more effective eligibility screening for COG therapeutic protocols; track outcomes through ongoing contact with patients; and, build the largest childhood biobank in the world.

What has he learned from the patients he has treated?

“There are many rewarding aspects of caring for children with cancer and their families,” he said. “Inspiration for delivering the best care available – and for doing research to improve the outcome – is never far away. I have been a pediatric oncologist long enough to be rewarded by children and families sharing photos from high school and college graduations, weddings, and even the births of their own children. While the field continues to have its unimaginable heartbreaks, the courage exhibited by children and families, alike, never ceases to amaze.”

With your support, doctors like Peter Adamson and programs like Project:EveryChild can continue to make a difference — in hopes that, one day, they’ll reach their ultimate goal of curing all children and adolescents with cancer while reducing the short and long-term complications of treatment.

A Look at Project:EveryChild with Rally Researcher Dr. Peter Adamson