The Spark Has Ignited A Fire: How Rally’s Seed Funding Paved the Way for Dr. Volchenboum and the PCDC 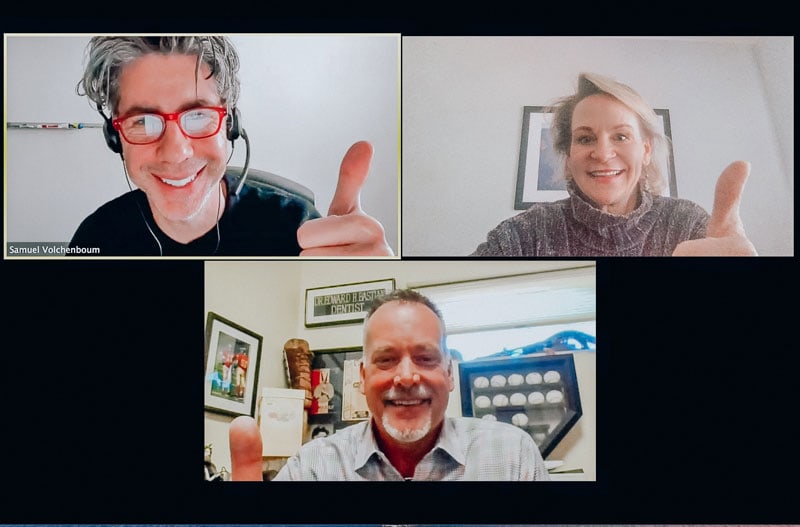 At Rally Foundation for Childhood Cancer Research, we often describe ourselves as “philanthropic seed investors in the next great discovery.” That’s because Rally invests early and continues to invest as projects make progress. It’s also because we like to take a few risks when it comes to funding the more “unconventional” research projects. After all, it only takes one spark to light a fire, and that spark—that next great discovery—could pave the way to finding a cure.

Dr. Sam Volchenboum’s Pediatric Cancer Data Commons (PCDC) was one of those “unconventional” projects that sparked a glorious fire—all because of Rally Kid Ruby, her father Dr. Jonathan Kaufman, and our shared desire to fund groundbreaking research for childhood cancer. 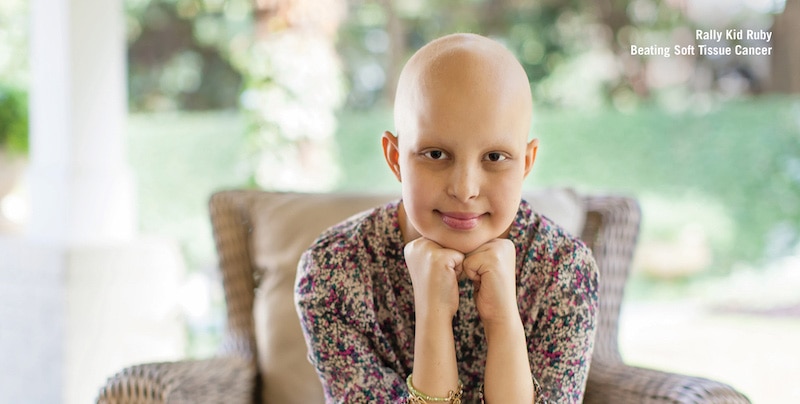 It all started back in 2015, when Rally Kid Ruby was diagnosed with embryonal rhabdomyosarcoma, a form of soft tissue cancer. Being the precocious 10-year-old that she was, her response to the diagnosis was: “But I’m too busy to have cancer!” While the cancer diagnosis changed Ruby’s life, it was the treatment that really took a toll. The brutal combination of chemotherapy and proton radiation took 11 months, 150 nights in the hospital, and left her with side effects that she still battles today.

After enduring such harsh treatments, Ruby knew she wanted to help other kids who went through the same experience. An avid dancer, Ruby and her family decided to host their first official Dance ‘Til You Drop event in 2017 to raise funding for Rally. That event resulted in nearly $75K for childhood cancer research!

The money went into the High-Risk High Reward Grant which would specifically fund an out-of-the-box research project focused on rhabdomyosarcoma. After Rally had the applications dual peer-reviewed, Ruby and her dad (who happens to be an adult oncologist) had a difficult decision to make: What research project should their donation help fund?

Ultimately, Ruby and Dr. Kaufman decided to award the grant to Dr. Volchenboum’s project, which would collect and provide critical data for rhabdomyosarcoma. The Rally funding came at a critical time for Dr. Volchenboum, who had all but given up on the prospect of getting seed funding for the Pediatric Cancer Data Commons. Now, thanks to Ruby, he had the spark he needed—one that ultimately paved the way for many other common and uncommon pediatric cancers to be added to the PCDC.

What is the Pediatric Cancer Data Commons?

You’re probably wondering what, exactly the PCDC is and why this project was chosen. Here’s the scoop:

The PCDC is a database that shares common language bringing together clinical, genomic and imaging data from institutions and researchers around the world that are working to transform pediatric cancer research and outcomes.

Why is that important? Access to data is vital for many reasons when it comes to fighting the childhood cancer beast. In fact, one of the largest barriers to advancements in the field, according to the PCDC website, is the lack of data and samples available for study. That’s why, thanks to Rally’s seed funding, the PCDC is focused on enabling researchers across the globe to easily share data and perform cohort searches, ultimately aiding pediatric cancer researchers in obtaining larger sample sizes and richer data for use in their work.

Another issue that the PCDC addresses is that not all data is written in the same “language,” meaning that there are many different ways you can input figures for even something as simple as age. One of the things that Dr. Volchenboum and his team tackled was to devise a common language for that data and also translate all of the previous data to the Data Commons. Now, it can be accessed easily, worldwide, through the Pediatric Cancer Data Commons Consortium: a data destination that’s currently developing a common core data dictionary and common governance structure spanning nine pediatric cancers including neuroblastoma, soft tissue sarcoma, acute myeloid leukemia, acute lymphoblastic leukemia, germ cell tumors, bone tumors, retinoblastoma, central nervous system tumors and Hodgkin lymphoma.

Rally has also invested in the osteosarcoma (bone tumors) PCDC.

The Spark Has Ignited A Fire

After the first spark ignites, it’s incredible to see how bright the fire blazes. That’s exactly what happened with this project: Ruby and Rally’s initial seed funding sparked additional funding for Dr. Volchenboum and his team, which opened the door to additional data commons that will benefit all types of childhood cancers and allow research and treatments to advance at a much quicker pace. 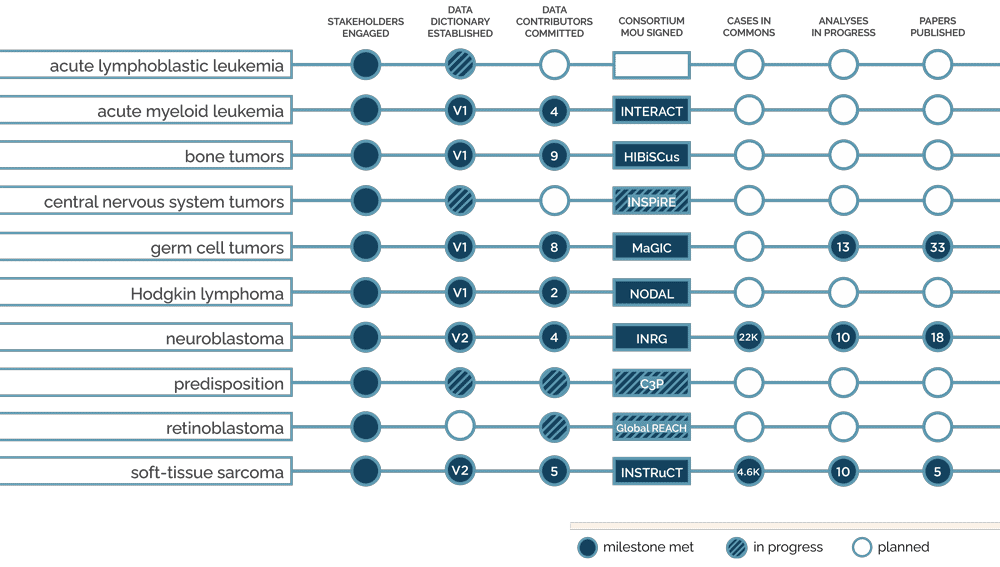 Progress of Pediatric Cancer Data Commons as of May 2021

Here’s more of what followed:

“Working with Oregon State University, we will be creating a resource for the NCI that will be for all cancer researchers including both adult and pediatric,” shared Dr. Volchenboum. In addition, the goal of the CCDH is to provide resources for researchers to harmonize their data. In other words, it leverages their strengths in building data dictionaries.

“We will be hiring several people as part of the CCDH project, and some of that effort and experience will also be spread across the PCDC,” he continued. To clarify, this is not part of CCDI, and the project is shared with Oregon State University, OHSU, Johns Hopkins and RENCI.

“This allows us to work on data dictionaries for several more cancers and to build out the data commons for those new areas including AML, ALL, Hodgkin, germ cell tumors, osteosarcoma,” Dr. Volchenboum said. “More importantly, the funding will help us build a common data dictionary across several cancers and to create a single cohort discovery tool for multiple malignancies.”

“We are doing two major things for PedAL,” Dr. Volchenboum shared of the initiative that was also funded by Rally. “First, we are creating the platform for matching kids with relapsed AML to clinical trials, and second, we are building the AML data commons (and later the ALL data commons).”

An Update On Progress

Since our 2017 seed investment for rhabdomyosarcoma in the INSTRuCT data commons, the PCDC has grown to include nine other data commons as of May 2021, including ALL, AML, bone tumors, central nervous system tumors, germ cell tumors, Hodgkin lymphoma, neuroblastoma and retinoblastoma along with predisposition to certain cancers. The PCDC is now working on most cancer types that impact children with three quarters of pediatric cancers currently a project of the PCDC or planned to be in the short-term.

The investment of the Leukemia & Lymphoma Society’s PedAL initiative, which Rally also supports, has resulted in GEARBOx, Genomic Eligibility Algorithm at Relapse for Better Outcomes. Cure rates for children with relapsed or refractory cancers are poor and it is often difficult to match them to Phase I/II clinical trials. This web-based tool will allow clinicians to filter available clinical trials using a patient’s clinical characteristics and biomarkers. A list of potential studies with resources for learning more about the trial will be available.

Rally is thrilled to see the progress being made and the growth within the PCDC by this outside the box idea. It only takes a spark to get a fire going and in research that is done through being seed investors in the next great discovery. We are so grateful to our donors who enable Rally to be that spark for kids fighting the childhood cancer beast. Thank you.