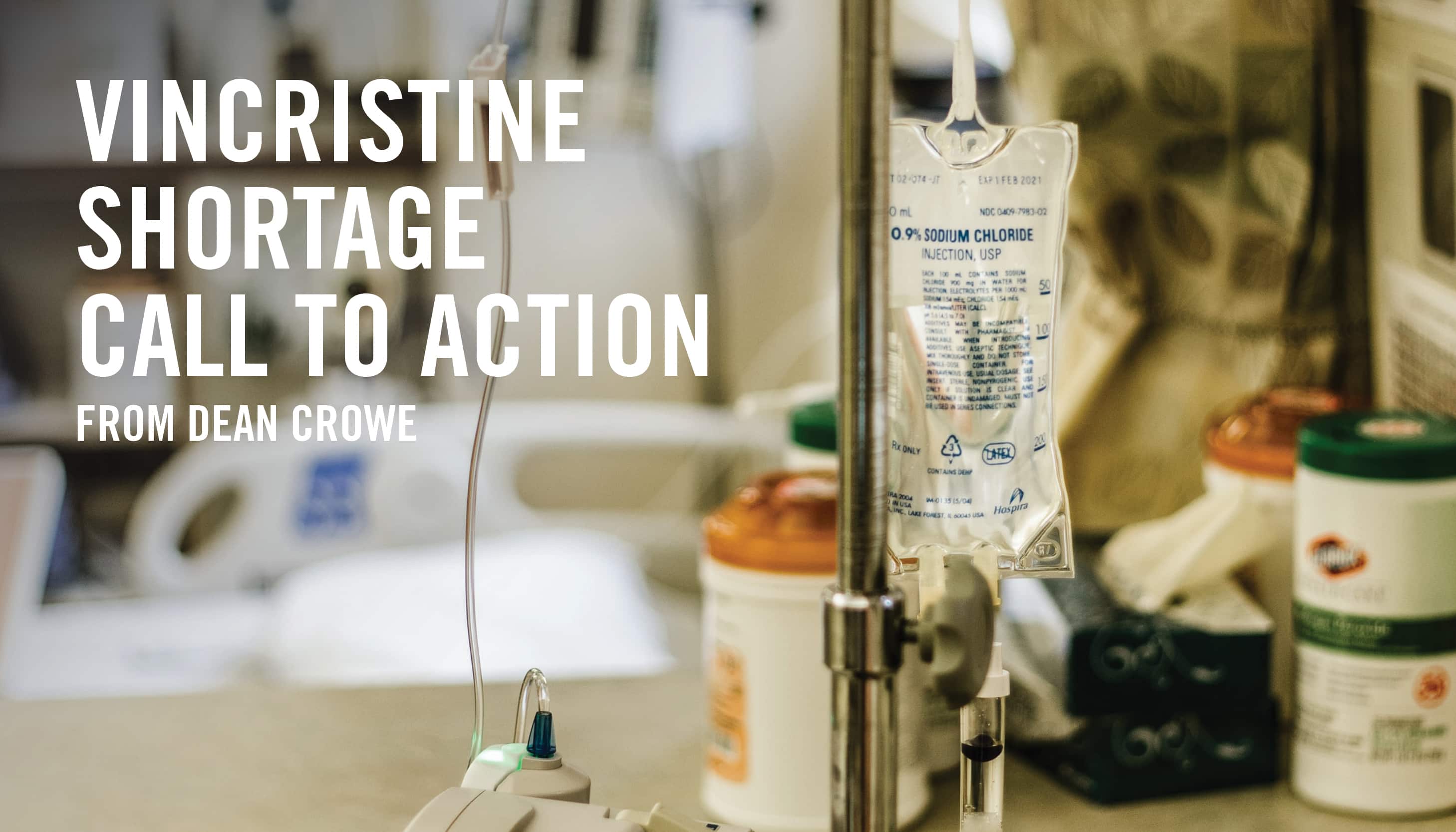 Vincristine is the most commonly used childhood cancer chemotherapy drug, and it works by stopping the cancer cells from separating into two new cells. Its job is to stop the cancer from growing. And now, because of the shortage, kids are being denied vincristine.

The Vincristine Shortage: What You Need to Know

On Monday, October 14, 2019 the New York Times reported that there was a shortage of vincristine. https://nyti.ms/2MBtKCM

That same day, Rally heard from parents that their children were denied vincristine.  One child was told that, even after having his port accessed so vincristine could be administered, he would not be getting the drug that day. Parents and children old enough to understand why they need vincristine were terrified, distraught and angry.

Of course, Rally was, too, along with the doctors who rely on vincristine to treat these children.  https://bit.ly/2MDNW7i

At Rally, we announced on our social media channels that yes, indeed, children were not getting their vincristine. The response was overwhelming. https://bit.ly/2JduhZE

These posts caught the attention of many parents, one of whom contacted Kaitlyn Ross from 11 Alive who then contacted me. https://bit.ly/2P7D82R

The 11 Alive story that ran on Wednesday caught the attention of NBC Nightly News who called Rally and also ran a story on the vincristine shortage on Friday. https://nbcnews.to/2N3liez

On Thursday, Dr. Peter Adamson, Chair of the Children’s Oncology Group, released a letter addressing the shortage, the actions being taken and what could be done in the interim. https://bit.ly/2JfHTUd

Friday was a busy day. In addition to NBC Nightly News doing a story, 11 Alive did a follow up story on Friday featuring Rally Kid Ethan who did not receive his vincristine earlier in the week.  11 Alive asked the important question: What can be done? https://bit.ly/2JdwjJ4

I was interviewed for this story and suggested the following solutions. First, there is a current law that allows the FDA to source the drug from other countries in the case of manufacturing difficulties. https://bit.ly/33Vcyy5

The law allows for temporary importation to alleviate the shortage until the manufacturing problem is fixed.

Also, on Friday, Pfizer released a letter saying that, according to its forecasting, that the demand can be met with their next shipment arriving late in October. The company believes they will be able to meet patients’ needs for the rest of the year, and that the supply should be recovered by January 2020.

I have a few questions. How did Pfizer and the FDA solve this problem so quickly?  Where is the vincristine to meet market demand coming from?  Is it really enough to meet current patient needs throughout the rest of the year?

I called Pfizer and was told that ‘Next Delivery’ means a certain amount is due in and ‘Recovery’ means the supply will be fully replenished.  Interesting that Pfizer’s letter says the October shipment will be able to meet patients’ needs for the rest of the year.

We are thankful and grateful that Pfizer and the FDA are addressing this issue. Hopefully and prayerfully Pfizer will indeed be able to fulfill all the orders in late October, allowing all children on vincristine to get back on their protocol. Rally, along with the rest of childhood cancer community, will be watching.

Monday morning The Alliance for Childhood Cancer, of which Rally is a member, announced that it is co-hosting a webinar with CAC2 this Wednesday, October 23. Dr. Adamson will be speaking on the call. https://bit.ly/31HXq5P

Sign this petition.  Once 100,000 signatures are collected it will go to the White House

Despite all this activity, everything is not okay. Not even close.

We, the childhood cancer community, cannot be complacent. The vincristine crisis has not been averted and it is not over. Today, there are children who are not receiving vincristine. And even when/if the vincristine is delivered to hospitals, what happens when Pfizer has another manufacturing issue?

A Single Provider is Unacceptable

It may be hard to comprehend, but Pfizer is the only U.S. provider of vincristine, the most commonly prescribed childhood chemotherapy. This is unacceptable.

We cannot rely on one company to produce the most commonly prescribed drug for childhood cancer. What happens when Pfizer faces another manufacturing issue?

There are many reasons why Pfizer is the only manufacturer.

The patent on vincristine has expired and is now a generic drug that does not have a high return for pharmaceutical companies. Dr. Adamson shared in his letter that the average sales price for a vial of vincristine is $5. It just isn’t a profitable drug. In Europe, more is spent on manufacturing generic drugs than on the development of new drugs. Both are needed.

Vincristine is a drug that is 56 years old1 and comes with a host of nasty side effects that include: neuropathy, which causes muscle weakness that can lead to the inability to walk, gastrointestinal pain, nausea, vomiting, constipation, hypertension, hypotension, bone marrow suppression, hair loss and pain. There are more side effects, but you get the idea.

Yet parents sign forms saying they understand this, as would I, so that their children have a chance to survive.

How sad is it that vincristine, even with its numerous side effects, is the best we have to offer the many kids fighting cancer?

How can it be that, in America, we cannot do better for our children than a 56-year-old drug with a plethora of horrific side effects?

There are pediatric oncologist researchers working to solve this problem. They have preliminary research and need federal funding to advance their discoveries. Yet, they are unable to secure federal funding because children with cancer are still not a national priority.

Rally sees itself as philanthropic seed investors in the next great discovery. Rally funding, along with other foundations and private funding can only advance the research so far. We need more federal funding for childhood cancer.

We surely need to find a better drug than vincristine. We need to fast track studies that are trying to find alternative drugs for multi-decade old drugs with massive side effects. Our kids deserve better.

I promise you nothing changes policy faster than a public outcry. Our united voices can be the public outcry that will make childhood cancer a national priority.

We must continue to advocate at the national level for new and better drugs for kids and adolescents fighting the cancer beast. At Rally, we believe and know there has to be a better way.

It was a hard week watching families fighting the horrific childhood cancer beast face another hardship when they learned that the very medicine their doctor prescribed was no longer available. And while the vincristine shortage is devastating, in the end, some good can come from it. It has led to passionate conversations that have forced the childhood cancer leaders and community as a whole to look at the drug shortage issue.

I believe this vincristine hardship is preparing us, ordinary people, to change the future of treatments available to kids fighting cancer. And that is an extraordinary destiny.