Kids look to their dads for bravery and encouragement. Unfortunately, fathers who’ve encountered the childhood cancer beast bear this burden even more so for their children and families. In honor of Father’s Day this weekend, we spoke with two of our Rally Kid Dads – Brandt and Trent – to share what their experience has been fighting childhood cancer and what life looks like after treatment. While their stories are different, both are committed to being the knight in shining armor for their children.

Both men know that cancer is the #1 disease killer of kids in America and that less than 4% of the federal funding for cancer research goes towards childhood cancers. Therefore, they advocate for more research not only for their children, but for all kids battling cancer.

It is our hope that their stories will inspire you to join the fight today and donate to Rally in honor of these men. They are so strong for their children, and together, we can be strong for them and make a difference by raising money to fund the most-promising childhood cancer research across the globe. 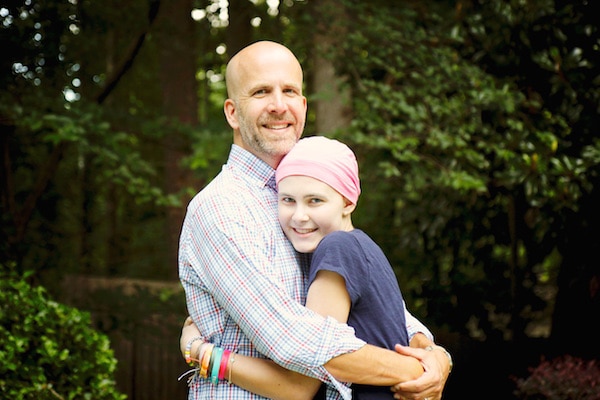 Tell us a little about Peyton’s journey.

This winter, Peyton started complaining of leg pain, but we thought it was just related to tendonitis or muscle issues because she plays sports, so we took her to a trainer. Then, she started complaining of headaches, and we thought that was just related to school stress. Five months ago, after a trip to the emergency room, her blood work came back showing she had leukemia.

For the first month to six weeks, it was a whirlwind, and every time something could have gone wrong, it did. We were always getting the worst-case scenario results. The doctors told us that her case was more unique and more complicated then they originally thought, making it trickier to figure out a treatment path. After first being told ‘leukemias are very curable,’ her prognosis decreased to a rate around 30 percent. The real risk with Peyton’s case was that she would never respond to chemotherapy or be able to get to a bone marrow transplant.

Will Peyton be home in time for Father’s Day?

Peyton actually just came home, but her life won’t change much from what it’s been like the past couple of months. She can’t go out in public, but she can go outside if she wears a mask. The real change will be our family being together in the same room for more than 30 minutes for the first time in five months.

We know being there for sick child is all consuming, but you still must provide for your family. How do you balance the two?

The comments I get most from people are, “How do you do it?” or “I don’t think I could do what you’re doing.” I don’t think anyone can ever anticipate what they can do until they are put in a situation where they have to. You have to lead your family through a very awful and long journey, so you put your head down and do it and push because if you stop and think about it, you’ll get consumed by it all.

I had to make the decision that my family comes completely first. The community that we have around us has made this a team effort though. Neighbors, friends, business partners and complete strangers have all pitched in to help our family, so we have a little less to worry about.

How important do you find cancer research?

I think cancer research is everything to us. It’s somewhat embarrassing that I came into this experience with no idea how prevelant cancer is in kids and the fact that we don’t have much better of an understanding where cancer comes from than we did 25 years ago. I’ve had full confidence in Peyton’s medical team as a result of research and collaboration. Our experience has made research that much more important because her case is rare. It’s not a textbook case. We’re grateful doctors were able to get her where she is today.

GIVE IN HONOR OF BRANDT AND PEYTON 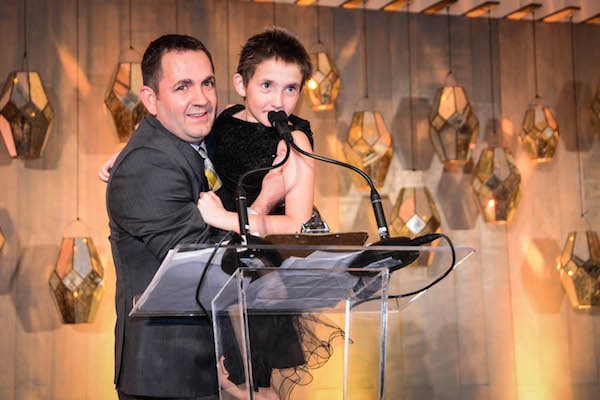 Tell us a little about Kailyn’s journey.

In July 2015, we found a large bump on Kailyn’s left thigh. We went in the next day to her pediatrician, and they were at a loss. They sent Kailyn in for an ultrasound, which showed that she had a mass. Following an MRI, we were told she had cancer. After a CT scan, bone scan and biopsy, we learned she had Ewing’s sarcoma. She started treatment immediately, which included chemo and a surgery to remove the tumor.

The very next day, I learned my  job was being eliminated at work, but there were other positions I could apply for (one of which I would thankfully get). My boss said I seemed awfully calm about the news, and I was, because in the scheme of things, my daughter was fighting for her life. We had recently celebrated Father’s Day, and I remember wondering if it would be my last Father’s Day with Kailyn, my only child. If you ever see a child fight cancer, it will change your life forever.

What words of advice do you have for dads of children currently fighting cancer?

As a father you want to be able to control everything, but unfortunately in this situation you can’t control everything. So, you have to look at what you can control. Holding your child when they’re in pain. Helping other people become aware of the problems these kids face. Pushing to get your friends and family involved in fundraising and awareness efforts.

Your family will also grow because you meet so many people through the process, and you become a part of this much bigger community. It creates a drive that you want to find a cure for all of these kids.

So in a nutshell my advice to fathers is to control what you can control, get involved with the process and do everything you can to support finding a cure.

What’s one way people have rallied behind your family?

A co-worker of mine, Madison Jones, met Kailyn and wanted to do something. She organized the White Oak 5K to raise awareness and funds for childhood cancer research. In its first year, the event raised $2,000. This year it raised $3,000. This support has meant so much to our family.

Rally has supported Madison to help make her 5K successful, and they work with others to make it easy to host fundraisers that raise money for childhood cancer research.

Kailyn still has scans every three months, so that’s always present in our minds. She recently had one-year scans that came back clear, but we held off on booking a plane ticket for a trip we were planning until after the scans because there’s that, ‘What if?’

Whenever she complains that her leg hurts, we get a sense of panic. It’s likely because she’s been out playing, but we’re constantly on the lookout for something else because it didn’t seem like anything serious when she was diagnosed, and it was. I’m not sure if that fear will ever go away.

Yet it’s not just my daughter. There are thousands of other kids facing what she faced, and you can’t help but wonder, ‘Is there a cure for all of the other kids who will be diagnosed?’

What have you learned about federal funding for childhood cancer research?

I have learned that the National Institutes of Health’s budget for childhood cancer research is less than 4%, and that is sad. We need funding and legislation changes, and we need more people talking about it and doing something about it.

What would you like to say to people who are researching childhood cancer for better treatments and cures?

Thank you – I mean it’s everything. A lot of the big pharmaceutical companies aren’t doing the research for childhood cancer because it won’t be as profitable as other things they could invest their research dollars in. So for the people who take the time to understand how the microbiology works and are helping to find a cure, there aren’t words.

I work in the hospitality industry. I rent used beds for a living. When people get stressed at work, I remind them, ‘We rent used beds. We are not curing cancer.’ It’s such a selfless thing these researchers are doing to dedicate their lives to finding a cure, and I could not be more grateful.

GIVE IN HONOR OF TRENT AND KAILYN

We wish all fathers a Happy Father’s Day, and we Rally On for all dads who have fought and are fighting childhood cancer. We are here for you.