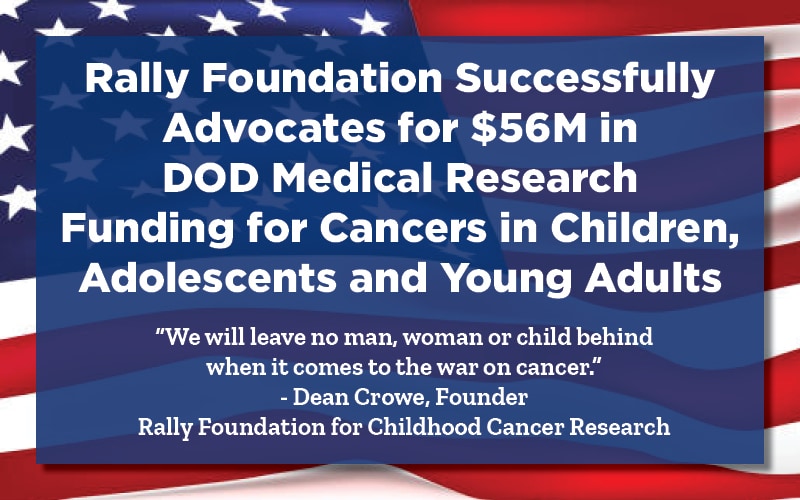 Rally Foundation’s Founder, Dean Crowe, who never stops looking for new funding, learned six years ago that the DOD has a $1.5 billion medical research program. At the time, about $300 million was allocated to cancers where the average age of diagnosis was 66 years old — even though almost 90% of active military personnel are 39 years old or younger with an average age of 25 years. In addition, Crowe found that 30% of them have children.

Children and AYAs (those 15-39 years old) account for around 100,000 cancer diagnoses each year and get different cancers than older Americans, requiring different research and treatments.

“Cancer is the #1 disease killer of this population, yet when it came to the war on cancer, the brave men and women defending our country were being left behind,” Crowe shared. “I realized that the DOD CDMRP was in the unique position to make a groundbreaking transformation in healthcare for our active military and their families and help fill a critical gap by investing in research for cancers that specifically affect this young demographic.”

The Peer Reviewed Cancer Research Program (PRCRP) in the DOD’s CDMRP exists to advance the mission readiness of U.S. military members affected by cancer — and that includes active service personnel, their spouses and children, as well as veterans and the public.

In 2017, Rally Foundation successfully advocated for the inclusion of funding for cancers in children, adolescents and young adults resulting in $3.1 million paid directly to researchers. Since then, Crowe and her team retained report language and each year saw funding increase.

U.S. Rep. Ann Kirkpatrick (D-AZ), who sits on the DOD Subcommittee, became a champion for this request in 2020. In 2021, in addition to cancers in children and AYAs, the committee added specific cancers by name that affect this younger population: sarcoma, germ cell cancers, thyroid cancer and lymphoma, which resulted in $39.2 million in new funding paid directly to researchers for these specific cancers. Crowe and her team also advocated for pediatric brain tumors, neuroblastoma, and colorectal cancers to continue to be included in the PRCRP. These three cancers were awarded $16.7 million, bringing the total this year to $56 million for cancers that affect our active military and their families.

“It has been an honor to work alongside the Rally Foundation for Childhood Cancer Research for the past few years. The tireless advocacy and partnership we have built have greatly impacted allocating historic levels of funding for cancer research. As an Appropriator, I see the wide range of funding requests from our offices; I determined early on that being a voice for the DOD Medical Research Program must be a priority for me. I am proud to have helped champion this important funding with my friends at Rally Foundation and I look forward to continuing to work alongside them on this vital mission,” said Rep Kirkpatrick.

Congressman Michael McCaul was the first member that Crowe met with in 2017 and he immediately offered his support which has continue each year. “I am proud to have led the effort to secure funding for increased cancer research that will work toward providing treatments and hope for survival. This funding within the DOD’s CDMRP will make a major impact on those children, adolescents, and young adults within our military that suffer from cancer,” said McCaul. “I look forward to continuing my work in Congress, side by side with the cancer community, to ensure that the youngest among us are provided the resources they need to survive,” said Rep McCaul.

The medical community shared its enthusiasm for this announcement of new specific funding for childhood and AYA cancer research: “We are grateful to Dean and the Rally Foundation for leading efforts to increase funding for research on cancers in children, adolescents and young adults and their related topic areas. The Peer Reviewed Cancer Research Program under the Defense Health Agency funds cutting-edge research for these cancers that specifically affect our active military personnel and their families,” noted Dr. Donna Kimbark, Ph.D. Health Science program manager with the DOD.

“The DOD PRCRP is an excellent source of funding to support pediatric and AYA cancer research. On behalf of COG and the pediatric oncology community, I want to thank the Rally Foundation for its effective advocacy in including pediatric and AYA cancer topic areas in the PRCRP funding portfolio,” said Dr. Doug Hawkins, chair of the Children’s Oncology Group, a clinical trials group sponsored by the National Cancer Institute.

Every day, 47 children in the U.S. are diagnosed with childhood cancer. Rally Foundation for Childhood Cancer Research, a 501(c)(3) nonprofit organization, raises awareness and funds for childhood cancer research to help scientists find better treatments with fewer long-term side effects and, ultimately, cures.

Rally Foundation has awarded $25.4 million in grants since its founding in 2005. In addition, Rally Foundation has successfully advocated for more than $74 million from the U.S. Department of Defense’s Congressionally Directed Medical Research Programs (CDMRP) given directly to researchers specifically for cancers in children, adolescents and young adults.

Rally Foundation has a perfect 100 rating from Charity Navigator, GuideStar’s highest rating and has received the Independent Charities Seal of Excellence. For every dollar raised, 93 cents supports Rally Foundation’s mission.