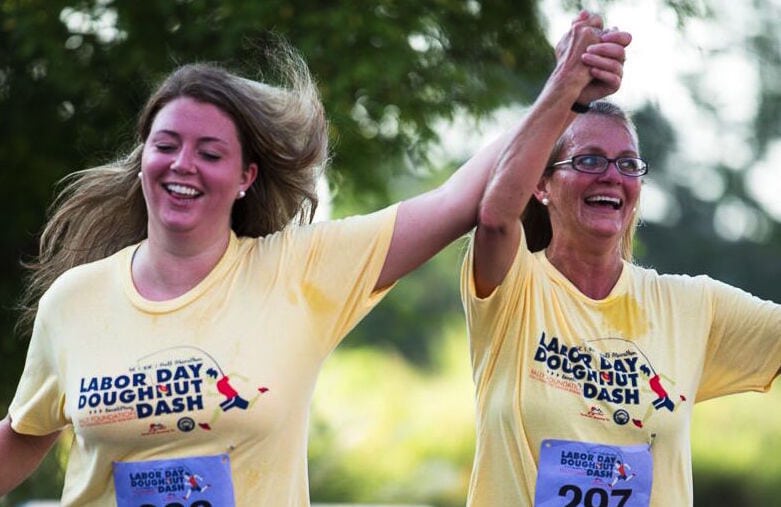 Through our business, Dutch Monkey Doughnuts, my husband Martin and I have become actively involved in raising money to find better treatments with fewer long-term side effects and, ultimately, cures for childhood cancer. We’ve partnered with the Rally Foundation for Childhood Cancer Research to make our impact on this community that needs our help so much. Rally has been a fantastic partner, offering unlimited support for our fundraising plans and goals. 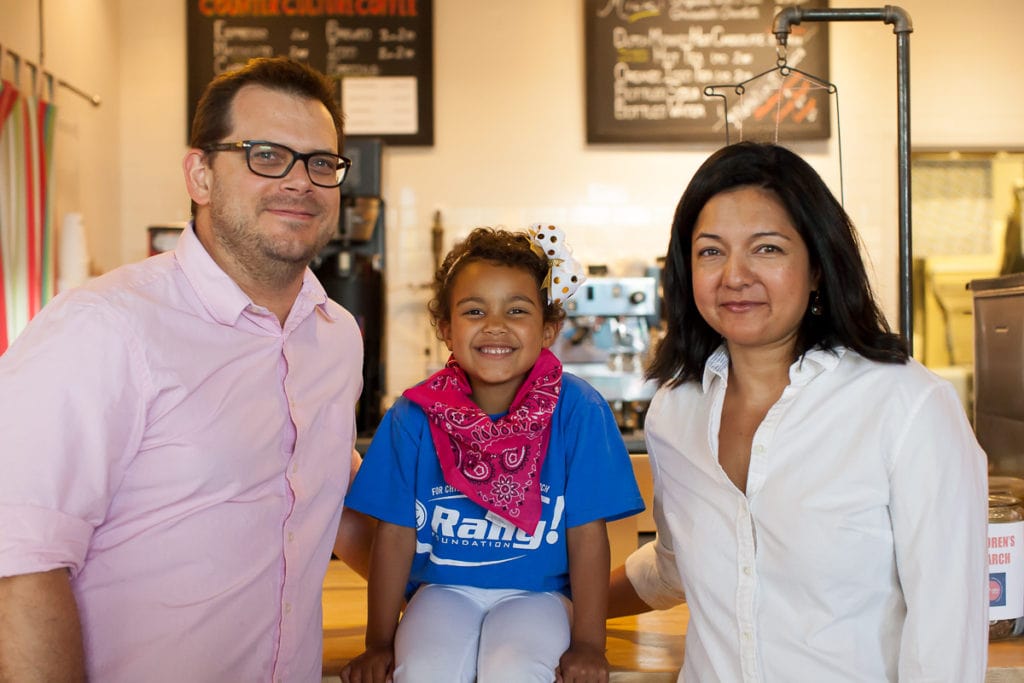 Currently, we are in the process of planning our second Labor Day Doughnut Dash with Rally to raise funds for children’s cancer research. Last year was our first year holding the event. We had more than 900 runners and walkers, not to mention countless doughnuts, and we raised more than $8,000 for children’s cancer research. It was amazing, so if you’re in the area, we hope you’ll join us for the event on Sept. 4, 2017! Help us, all of us, reach the common goal of banishing cancer from childhood, so kids can get back to being kids. It’s something we can do!

You’re probably wondering how we got involved with raising money for cancer research. We first opened our shop to escape the madness of late night restaurant work, make a living and be able to work together. There wasn’t really a greater purpose, other than bringing sugary smiles to the faces of our customers. Within our first year, though, we started to get to know our customers, something that is not really part of the equation when working in a big restaurant kitchen. We realized the shop we opened was quickly creating a community on its own.

As we approached our first anniversary, a customer came in asking to put a jar on the counter to collect spare change for cancer research in honor of her mother, who had just passed away from multiple myeloma. We weren’t in the habit of putting out collection jars as there would be one for every cause imaginable and no space for doughnuts on the counter! However, this cause was special because Martin’s sister had also been taken by multiple myeloma years prior, and this customer was the first person he’d met who had been through that experience, so we did it. 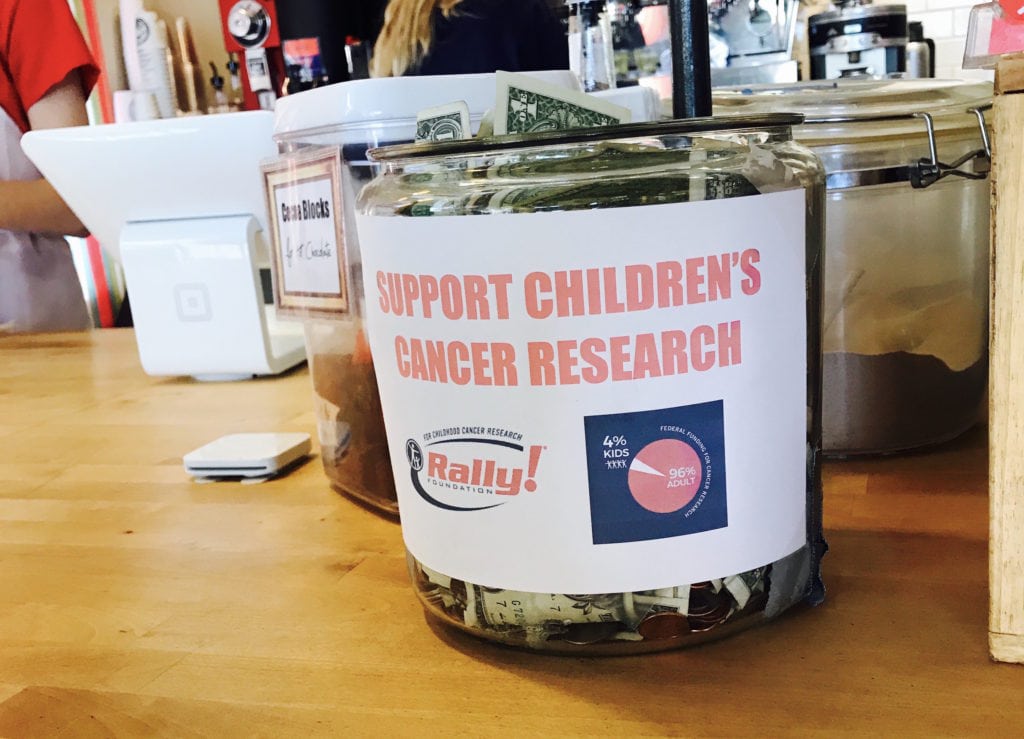 Our customers have been so supportive of our change collection fundraising for cancer research.

We eventually joined forces with her to build a fundraising team that raised more than $300,000 for cancer research and patient support over the course of five years. This process strengthened our shop community and gave us, as business owners, a passion to follow outside of our business, which is important to have. Also, it was really cathartic for Martin. His sister passed when he was in his 20s, and his family was never big on talking about feelings and such, so he had some unresolved emotions surrounding that process.

I remember it all kind of clicking for both of us as we prepared to do a century ride in Las Vegas that we had fundraised about $6,000 for, with most of the people we were riding with have a connection to cancer. They were survivors and family members or friends of people who had fought the fight, with everyone wanting to do something about it. What could we collectively do, lacking medical and scientific degrees? Well, we could raise funds for people who DO have medical and scientific degrees, who are working hard to put an end to cancer. That’s how riding your bike to try to cure cancer makes sense; it’s something almost anyone can do. We continued on with new resolve, doing cycling events, triathlons, marathons, garage sales and an annual doughnut eating competition, with all proceeds going to the cause. Along the way, we saw more and more information about the advancements being made in cancer research, statistics boasting greater survival rates and stories of people surviving the previously unsurvivable. It felt good to know that we were a part of that progress. 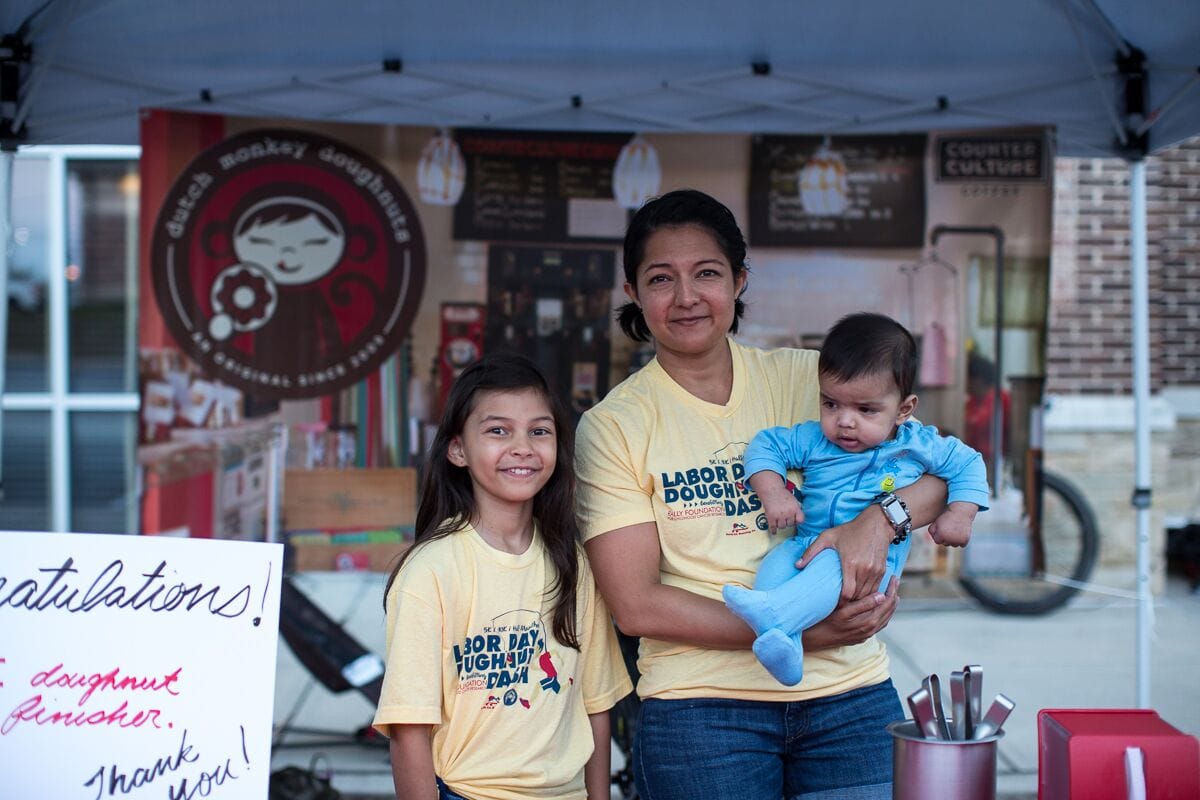 After participating in several races to raise money for cancer research, we decided to host our own. The Doughnut Dash is truly a family affair.

And then, Martin’s niece, his late sister’s daughter, found out that she had breast cancer. Insert thoughts about how unfair life is and questions of why this happens to young people. And how even though progress is happening, it’s not happening nearly fast enough. We watched her fight it, armed with all of the tools that modern science gave her. It was spectacular. Chemo, radiation, surgery, reconstruction…in a whirlwind year, she beat cancer down like a champ. Something that was previously considered a life sentence was gone. Yes it left lifelong scars, but it is gone.

It was around this time that we learned about Rally and started following the stories of some of the Rally Kids. To think of these tiny people fighting this demon that can take down full-grown, healthy adults was heartbreaking. Then, learning that the treatments for adults and kids are virtually identical? Shocking. And only 4% of the National Institutes of Health’s cancer-fighting budget goes to helping these sweet kids? What?! That all needed to change, like decades ago. I mean our world has figured out how to put tiny supercomputers in the pockets of every man, woman and child, yet we can’t keep kids from getting cancer and aren’t better equipped to help them if they do? That’s insane.

So now our fundraising efforts go towards Rally. The organization has been great to work with and understands that we have a business to run and a family to raise, and those things require our time and attention as well.

On top of how easy Rally is to work with, as a business owner, I appreciate how efficient Rally operates with 93 cents of every dollar raised going to Rally’s mission of funding the most promising research so that treatments with fewer long-term side effects and, ultimately, cures can be found for children battling cancer. If you are a business owner, I encourage you to connect with Rally to see how you may be able to work together to help kids with cancer.